Sunday, November 15, 2020, was the 40th anniversary of the episcopal ordination (consecration) of His Eminence Archbishop Nathaniel (Popp) of Detroit and the Romanian Orthodox Episcopate of America. It is indeed a rare, unique, and joyous occasion in the Church when a hierarch completes 40 years of archpastoral ministry. Many Years, Your Eminence! Întru Mulți Ani, Înaltpreasfinția Voastră!

His Eminence Archbishop Nathaniel was raised by his Romanian-American parents, Joseph and Vera (Boytor) Popp, in Aurora, IL. Growing up in the Byzantine Catholic tradition and being educated in Rome, he joined the Orthodox Church in 1968. After serving as the parish priest at Holy Cross Church, Hermitage, PA in the 1970’s, he was nominated to the Holy Episcopacy on September 20, 1980. His episcopal ordination (consecration) to the Holy Episcopacy took place at Saint George Cathedral, Southfield, MI on November 15, 1980. He was ordained to serve as the Auxiliary Bishop to Archbishop Valerian (Trifa) of Detroit and the Romanian Episcopate, and so he received the title of Bishop of Dearborn Heights.

In 1984, following the retirement of Archbishop Valerian, then-Bishop Nathaniel was enthroned as the ruling hierarch of the Romanian Episcopate. Since then, he has overseen the tremendous growth and expansion of the diocese with the establishment of dozens of new missions and parishes, as well as monastic communities for women and men, while carefully maintaining the Romanian Orthodox tradition and integrating many recent immigrants into North American society.  At the same time, he has recognized the importance of a united Orthodox Christian witness in this land, and has remained at the forefront of the movement toward this end. On October 20, 1999, he was elevated to the dignity of Archbishop by the Holy Synod of Bishops of the Orthodox Church in America.

While an in-person celebration is not able to take place due to the ongoing health restrictions, those wishing to congratulate His Eminence may send him mail at: 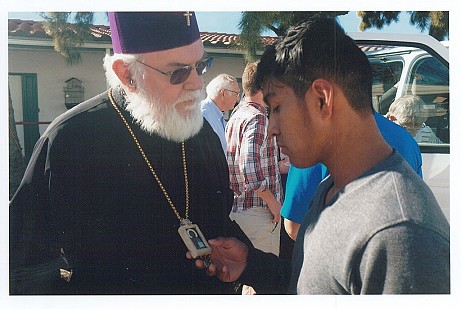